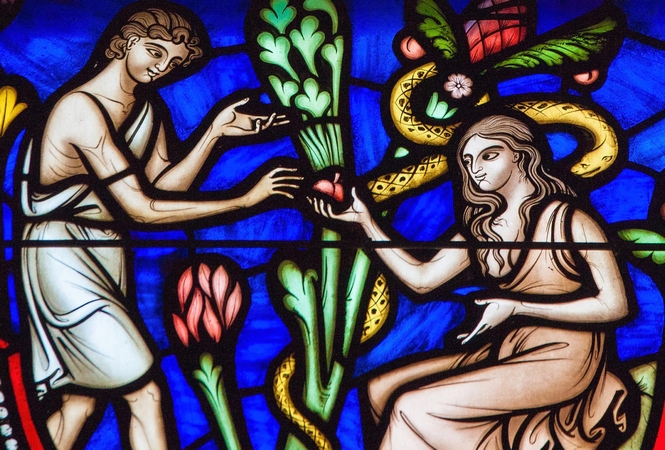 According the Christian tenet of Original Sin, all presently living humans descend from a single ancestral couple. This tenet is often misunderstood, even by Catholics, in spite of their having access to the most detailed dogmatic formulations. First of all, in the descendants of Adam and Eve, Original Sin is not a sin but a condition of the human soul. Obviously, this condition of the soul is not causally transmitted by procreation. Procreation only transmits the genome, quite generally, and human procreation only transmits the human genome. More crudely speaking, the human embryo is an animal of the species Homo Sapiens. It only becomes human, in the sense of spiritual, after God creates, ex nihilo and specifically, the human soul to that human body. Consequently, Adam and Eve became human beings in exactly the same way as you and I: before their animation (ensoulment), they were two animals of the species Homo sapiens. Nothing more and nothing less: just like all other animals of their tribe.

The fallen human condition comes along with generation not causally, but by a free choice of God. It is not at all a punishment. Punishment it was only for Adam and Eve, who were driven out of the Garden of Eden. Their punishment was the knowledge of the terrible gap between their previous condition and the posterior. We do not know that previous condition, whence we do not partake in the punishment. God is not being unjust here, because Adam and Eve did not deserve their condition, and neither do we deserve ours. Both conditions are a free gift of God.

It is impossible to know, from theology alone, if Adam and Eve would have generated children, had they not sinned. To me it makes no sense they would not have, but I do not claim this to be a theological certainty. The historical fact is that, after the fall, they did beget. Not exclusively among themselves, but also with other animals of their same biological species. If this hurts your feelings, simply consider that the other option (that Adam and Eve’s children begot among themselves exclusively) is incest; and even worse if their parents were involved. God’s covenant with Adam and Eve was that He would endow all children of at least one spirited parent with a spiritual soul. This is not a dogma itself, but dogma leaves no other rational option: from a biological point of view, the incestuous hypothesis is untenable, given the polymorphism of our HLA (human leukocyte antigen) complex (most specifically, of its DRB1 gene).

For this reason, the biblical Eve identifies with the mitochondrial Eve. Had she been younger, then she would have mothered but a part of the presently living human population, which is at odds with the tenet of Original Sin. She could not have been older either, else one should explain why the exponential growth of the human population was deferred. Currently, geneticists have no clue concerning the demographic explosion of Eve’s children. They have an even harder time to explain gender asymmetry in hybrid mating. This means the following. In the last 300 thousand years of the 600 thousand year-lasting evolutionary history of Homo sapiens, hybrid mating between anatomically modern humans and Neanderthals occurred relatively frequently (though less than 1:1000). They were what we call today two different races of the same species. Since Adam and Eve, anatomically modern humans would come in two flavors: spirited (like us) and spiritless (like the Neanderthals and all other animals). For the sake of convenience, I use hybrid offspring that which proceeds from either a Neanderthal father and a human (spirited) mother, or a Neanderthal mother and a human (spirited) father. Both kinds of hybrid offspring were fertile, and procreated successfully: as is usual, for two races belonging to the same species. However, in the present-day human genome, there exists evidence only of gene transfer from Neanderthal fathers, and not from Neanderthal mothers. This is the gender asymmetry in hybrid mating. In our evolutionary past, there was an earlier one. It occurred 300 thousand years ago, and implied a gene transfer from anatomically modern humans to Neanderthals. That is to say, the gene flow occurred the other way around; however, the gender asymmetry was identical: anatomically modern females were adopted by a Neanderthal tribe, and their progeny was so successful, that it completely replaced the progeny of the Neanderthal females.

For geneticists, who are used to explaining phenomena in terms of genetic mutations, this is a tough nut to crack indeed. Geneticists will probably never crack this nut, as the answer lies outside their discipline. It lies in a scientific discipline called anthropology: the study of human behavior. It is elementary human behavior, which explains gender asymmetry. Hybrid mating usually was the consequence of rape after tribal warfare. Had a Neanderthal tribe submitted a human one, then human ladies would be raped; and the other way around. Understandably, after giving birth, the mothers would try to educate their children in (what was left of) their own tribes. Human mothers would educate their hybrid progeny in a human tribe. They not only assimilated perfectly well in the human tribe tribe, but even carried a distinct biological advantage over the pure race. Neanderthal mothers would do exactly the same, in their respective tribes. Obviously, a spirited creature would behave oddly in a Neanderthal tribe, be expelled, and left to die. These ‘woulds’ are not meant as mathematical rules, but statistically, as majority events. A gender asymmetry means just that: asymmetry. It does not mean that a spirited child of a Neanderthal mother never made it back to a spirited colony. Rather, that must have happened sometimes, though exceptionally, whence it is highly improbable that we will ever find genetic traces of such events. From these simple, common-sense considerations, I dare state that geneticists will never crack the gender nut: one cannot tell from the genes, whether a child was begotten with the lady’s consent. Not now, and not ever — whatever geneticists try to tell you.

The lessons learnt from genetic biology (about the origin of the human body) and quantum mechanics (about the necessity of a spiritual soul, for deciding on which of the allowed quantum options to realize) allow a much better understanding of the theological tenets of resurrection and of original sin. Even cardinal Ratzinger failed to grasp the nature of resurrection, in his dogmatic lecture notes of 1977: both in the scriptural sense and in the metaphysical sense. Scripturally, because everything is said in the book of Job: there is no trace of an historical evolution of the concept of resurrection in the scripture. Metaphysically, because Ratzinger believes that it is some mystical body that resurrects, rather than the ordinary body.

As far as original sin is concerned, a 2007 Theological Commission reported to the same Pope Benedict XVI, that unbaptized unborns are in strict justice destined to hell (for a definition of hell, see §§ 1033-1037 of the Catechism of the Catholic Church). This is utter nonsense, and highly detrimental to the institution that proclaims such nonsense. What neither the Theological Commission, nor Pope Benedict XVI seem to grasp, is that in the children of Adam and Eve, Original Sin has no reason of sin but of nature, even though the nature be wounded (§§ 406-498). God can do a lot of things, but he cannot operate against reason, nor against justice. He cannot doom a soul that never repudiated Him. This does not mean that no single unbaptized unborn goes to hell: that would be unjust, too. It simply means that the fraction of unbaptized unborns going to hell is the same as that of unbaptized adults, and that of baptized adults. The only difference between these three categories is in the accessible depths of heaven and hell: the more grace one receives, the higher the heaven (for who operates accordingly) and the deeper the hell (for who rejects that grace). Of course, one should be careful in applying these theological statements. It makes a big difference, whether one has no access to baptism for societal reasons (e.g. for Jews and Muslims suffering family pressure), or whether one has societal access, but freely chooses not to be baptized. The latter choice is patently against grace, the former not. Moreover, in the latter case, the intensity of the refusal of grace depends essentially on one’s understanding of the nature of baptism.