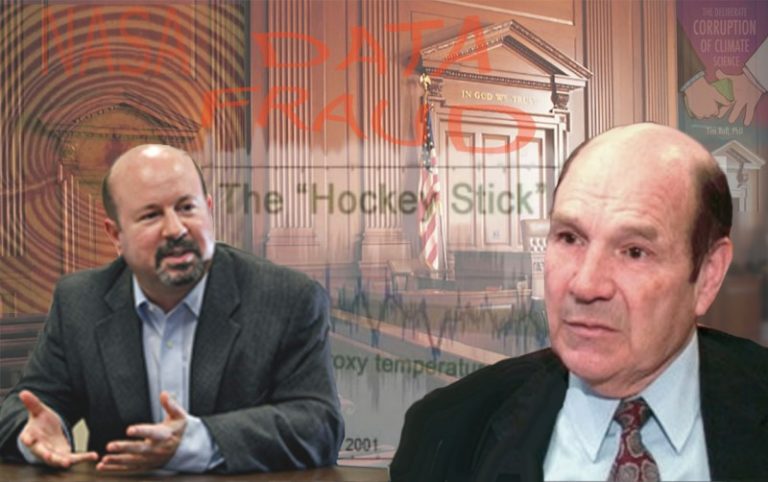 In January 2014, Dr. Tim Ball published a book entitled The Deliberate Corruption of Climate Science, in which he exposed an international money-making global warming scam. Later that year, Dr. Michael Mann filed a “Strategic Lawsuit Against Public Participation” in the British Columbia Supreme Court, Vancouver, against Canadian climatologist Dr. Tim Ball, because the latter’s public comment that “Mann belongs in the state pen, not Penn. State.” The suit did not go as smoothly as Mann had wished. Soon, he found himself in a defensive position, and asked the court for adjournment. In Ball’s own words:

“Michael Mann moved for an adjournment of the trial scheduled for February 20, 2017. We had little choice because Canadian courts always grant adjournments before a trial in their belief that an out of court settlement is preferable. We agreed to an adjournment with conditions. The major one was that he [Mann] produce all documents including computer codes by February 20th, 2017. He failed to meet the deadline.”

Dr. Mann and his lawyer, Roger McConchie, flatly refused to comply with the court direction to provide it with the source of his disputed data, on the basis of a foreign court ruling. In Dr. Ball’s own words:

“We believe he [Mann] withheld on the basis of a US court ruling that it was all his intellectual property. This ruling was made despite the fact the US taxpayer paid for the research and the research results were used as the basis of literally earth-shattering policies on energy and environment. The problem for him is that the Canadian court holds that you cannot withhold documents that are central to your charge of defamation — regardless of the US ruling.”

On august 22nd, 2019, the Court decided on the defendant’s request for dismissal on the grounds of repeated instances of inordinate delay by the plaintiff. In the Court’s own words:

“The plaintiff, Dr. Mann, and the defendant, Dr. Ball, have dramatically different opinions on climate change. I do not intend to address those differences. It is sufficient that one believes climate change is man-made and the other does not.”

Referring to an earlier ruling, the Court set out four elements that need to be considered on a motion to dismiss:

The Court ruled positive on all four counts. All expenses of the defendant (Dr. Ball) were to be paid for by the plaintiff (Dr. Mann) because of the plaintiff’s multiple events of inordinate delay.

The two graphs below represent Mann’s data manipulation (above) and the scientifically ascertained data on “global warming” (below).

Clearly, the IPCC wishes us to believe that overpopulation is the main source of global warming. Although a population of ten billion human beings obviously produces heat, it is orders of magnitude lower than natural sources of heat. The same population does produce carbon dioxide too, but again, it is orders of magnitude smaller than natural sources of carbon dioxide.