Fuellmich – Welcome to the Club of Lunatics 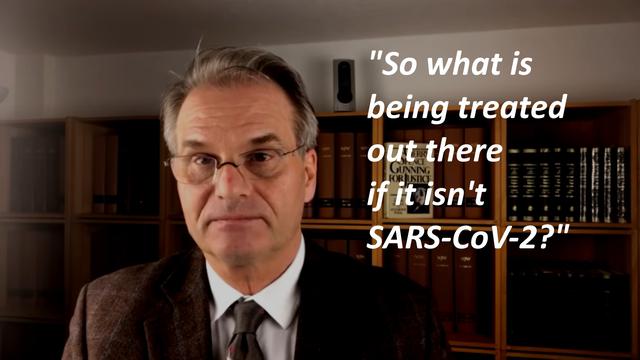 Reiner Fuellmich has been admitted to the bar in Germany and in California for over 26 years. He has been a trial lawyer against fraudulent corporations. He successfully sued three German companies (Deutsche Bank – formerly one of the world’s largest and most respected banks, today one of the most toxic criminal organizations in the world, convicted as a criminal enterprise, to pay more than $ 130 million in damages; Volkswagen – one of the world’s largest and most respected car manufacturers, today notorious for its giant diesel fraud and modified catalytic converters; and Kuehne & Nagel – the world’s largest shipping company) for multi-million dollar bribery. In his view, however, these three cases pale into insignificance in comparison to the corona case, which he is currently investigating, as one of four members of the German Corona Investigative Committee. Since July 10th 2020, this committee has been listening to a large number of international scientists and experts, and it prepares an international class action lawsuit under Anglo-Saxon law.

Fuellmich’s team, assisted by one thousand lawyers and over ten thousand medical experts, has begun legal proceedings against the CDC, WHO & the Davos Group in Trials of Crimes Against Humanity. Characteristically, the main stream media do not report it. Below follow some transcribed interview quotes:

These are the worst crimes against humanity ever, ever committed. We all know now (…) this has never been about the virus. This has never been about health. This has always been about taking everything away from us so that we would be dependent on them – Plus, population reduction, plus gaining complete control over those who are left. That is… I wouldn’t have said this a year ago. A year ago if you would have asked me, or if somebody had told me this, I would have said, “Hey, you definitely need to see a doctor.” But no, this is what all the evidence, all of the people who we interviewed on the corona committee, what this points to, there’s… this is the conclusion is inevitable. If you, if you don’t have any symptoms, are you really going to go see a doctor? Just because of what this idiot Drosten says?

The Drosten-Corman, (…) the PCR test protocol, it is completely unscientific. (…) it looks as though it was done in such a sloppy way on purpose. For the sole purpose of producing as many false positives as possible, all over the world, so that their agenda, which ends with the so-called vaccinations, which of course we all know now doesn’t have anything to do with vaccinations. What we’re dealing with is genetic experiments. In the end, the clean-up will take years. We’re hoping that this… it’s like an arm-wrestling that’s going on right now.

And I think what happened is they, we have a whistleblower – And she told us that the original plan was to roll this out in 2050. But then those who are involved in this got greedy and pulled things forward to 2030, and then to 2020, and that’s why we think that’s why so many mistakes are happening. Because as I said, they did not really (…) intend these adverse reactions to happen.

So this is not really about money. It is about money because they’re using money in order to bribe people and the hospitals, the doctors, politicians. They’re also using all kinds of psychological techniques in order to manipulate people or they threaten people, many politicians, some of them may be threatened, some of them may be getting bribed. But it’s not really about money. They’re using money as a tool. So what we think is their, what they’re really up to is… you have to keep in mind that the very same people we, a part of which we now call the Davos clique, you know, the self-appointed political elite and the self-appointed corporate elite, that is part of the people who we’re dealing with. And those are the ones who are responsible for the financial crisis some ten or twelve years ago. Had we been a little more careful, had we looked a little closer, we would have known that for thirty years this group of people has been stealing the tax-payers money all over the world. The first financial crisis would have been the perfect chance for us to catch on to what’s going on. They managed to tell us that they have everything under control. They didn’t. But they started to print money in order to keep us quiet. We should’ve been… we should’ve known that you cannot print money in order to restore what they have stolen. It doesn’t make any sense. Well, this time around, in late 2019 I believe, when things were again coming to a head and things were, again, about to implode, they came up with corona as a diversionary tactic. And we have to keep in mind however, we’re not dealing with a monolithic wall on the other side. There’s lots of infighting, there’s contradicting interests, and that’s another one, another one of our chances that we have. But you know, we spoke to another investment banker, another American investment banker, and she says the reason why Europe is at the center of all this, this is probably the most important battle ground in this whole war, is because Europe is completely, definitely, totally broke. The ECB is totally broke because they bought all this, all these bonds and papers that are totally, completely worthless. And, what’s even more important, the pension funds, they’re completely broke. Meaning, if people find out about this, that despite their spending so much money on their pensions, there’s nothing left, that’s all stolen. Then we’re going to have a real problem.”

Here we have a Fuellmich who talks about ‘they’ and ‘them’ –a relatively small Davos mafia behind all population reduction, mind control, and the like– while he certainly would not have said this a year ago. His friends would have referred him to a doctor. However, with all the evidence on the desk, he feels “the conclusion is inevitable”. Although we heartily welcome Reiner Fuellmich to our club of raving lunatics, who believe there is a huge (in power, not in number of people) global mafia behind the corona measures, we are in deep pain, though. For, with Fuellmich, we see once again that our epoch’s enlightened academics only accept the existence of the Rothschild mafia when all the evidence is on the table. They seem intellectually unable to conclude the existence of the Rothschild mafia on the basis of solid historical facts. For the latter, one needs to think for oneself, and trust one’s own rational capacities. With all the evidence of fraud on the table, anybody could draw such a conclusion. Even Fuellmich.