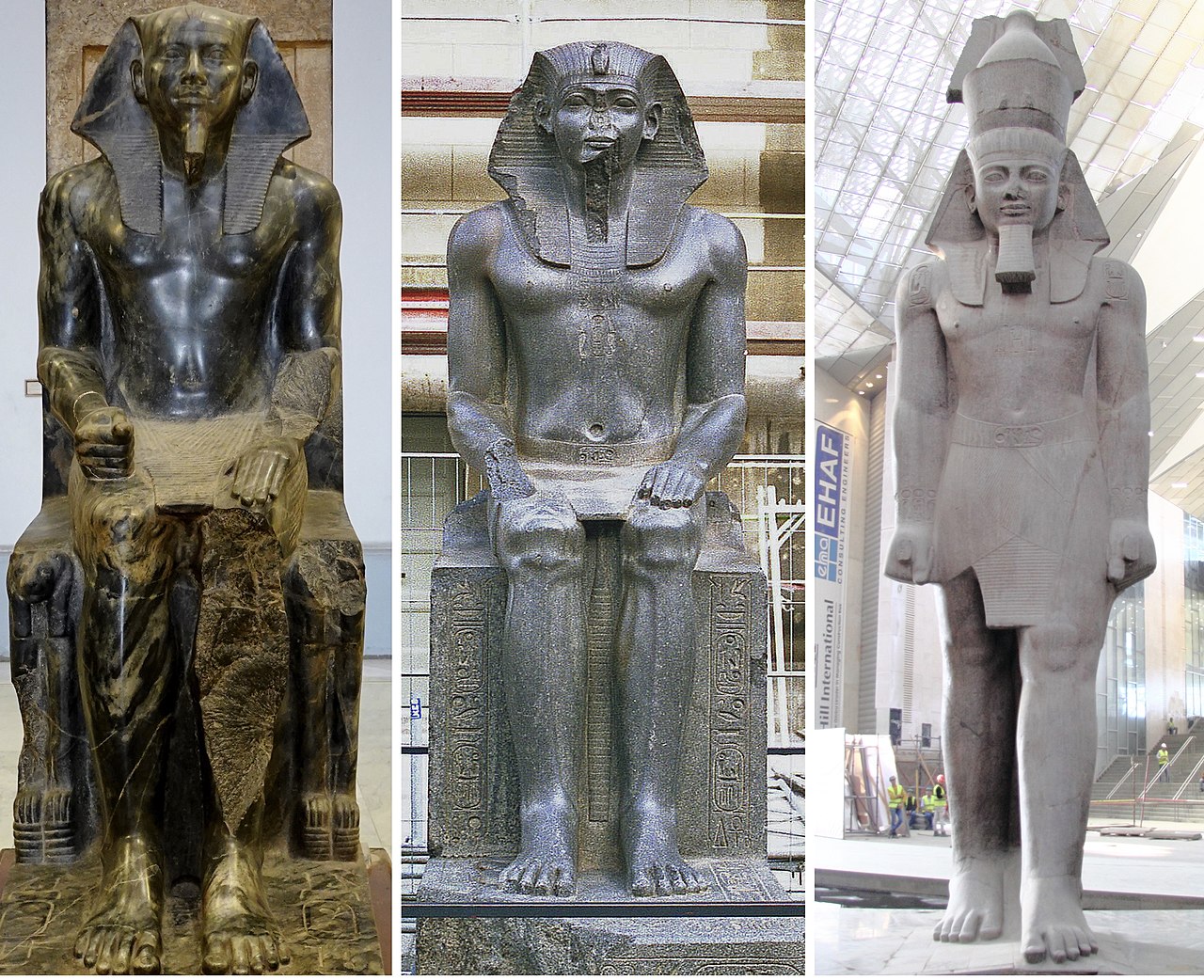 The third pharaonic golden age is that of the ‘New Kingdom’ (1550-1069 BC), which comprises dynasties 18, 19 and 20. It was preceded by the ‘Second Intermediate Period’, during which a Semitic people from Canaan (disparagingly called ‘Hyksos’, meaning ‘shepherds’ according to Sextus Julius Africanus, and ‘foreign conquerors’ according to recent investigators) had seized power in Lower Egypt. Many archeologists identify these Hyksos with the Israelites. Recently, a popular video was produced by James Cameron and Simcha Jacobovici, who share that view in their 2006 video Exodus Decoded. At least two Egyptian dynasties were Hyksos: the 14th and 15th ones (1850-1550 BC), and probably the 16th, too. According to the Bible, Joseph arrived in Egypt around 1880 BC, and Moses left Egypt around 1450 BC. This implies that the 12th dynasty was close to collapsing when Joseph arrived. Except the last century (1550-1450 BC), the Israelite stay in Egypt was marked by very favorable circumstances, as their number multiplied a thousandfold: from a few thousand upon arrival, to a few million, upon departure (Exodus 12:37). For a stay of 430 years, this accumulated accrual implies a generational accrual factor of 1.6 (assuming a generation time of 30 years). This accrual factor is high indeed, but significantly smaller than the world population growth rate in the years 1965-1970 (2.1% per year, which corresponds to an accrual factor of 1.9 per generation).

Recent archaeological excavations in Tell Edfu indicate that the Hyksos ruler Khyan (15th dynasty) was a contemporary of king Sobekhotep IV (13th dynasty). Due to repeated periods of famine and poor rulership, the 13th dynasty collapsed, too, and the Hyksos expanded their territory from the Levant to full Lower Egypt. Their capital was Avaris. The Hyksos were called ‘Aamu’ by the Egyptians, which was also the term used to designate the inhabitants of Syria and the Levant, or the enemies of Ramses II at the battle of Kadesh. This has generally been translated as ‘Western Asiatics’ by Egyptologists. The Hyksos reign ended towards the end of the Seventeenth Dynasty of Egypt (1580-1550 BC), which was based in Thebes. The last two kings of the dynasty (Seqenenre Tao and his second son, Kamose) opposed the Hyksos rule over Egypt and initiated a war that would finally rid Egypt of the Hyksos kings. Ahmose I, brother or son of Kamose, was the first king of the Eighteenth Dynasty, to rule over a unified Egypt (including Upper Egypt).

Amenhotep I, son of Ahmose I, campaigns in Nubia (Upper Egypt). He leaves no heir to the throne. Tuthmose I marries into the royal family, and takes the throne. He campaigns as far as the Euphrates (present-day Iraq, not shown in the map). Hatshepsut, daughter of Tuthmose I, establishes trade networks throughout her empire, as far south as the territory of Punt. Aged 20, Hatshepsut marries her half-brother Tuthmose II, aged 12. Tuthmose II dies young, having just fathered a harem-borne son, Tuthmose III, in 1481 BC. He rises to the throne when his father dies, aged 2. In order to secure his throne, Hatshepsut becomes Pharao a year later (1479 BC), and has herself portrayed with the symbolic beard. Once Tuthmose III has come of age, she appoints him supreme commander of her armies. Hatshepsut dies in 1458 BC. Tuthmose III becomes Pharao with full powers, and rules until 1425 BC. A military genius, he captures 350 cities in his 17 campaigns. It is fashionable among Egyptologists to claim that there are no historical indications for Tuthmose’s reasons to order, about two decades into his reign, the systematic removal of mentions of Hatshepsut as pharaoh: it is obvious that the two got along quite well. Fashionable but wrong. The reason for her erasure (damnatio memoriae) is recounted by an historical source of prime confidence, which is the Bible: Hatshepsut was the daughter of Pharaoh, who picked Moses out of the river, and took him as her own son (Exodus 2:1-10), for she was probably barren. Obviously, she fell in disgrace after Moses’ plagues had hit Egypt so hard: this occurred about 12 years after her death (remarkably close to the two decades proposed by fashionable Egyptologists). Only the ideologically biased are unwilling to acknowledge that the Bible is unique among all ancient writings, for offering a chronology back to more than 4000 years ago, which proves exact to the single year.

Phonetically, Moses’ name means ‘I drew out’ (of the water) in ancient Hebrew. However, in ancient Egyptian, it refers to spiritual parentage, in the sense of ‘son of’ some divinity. The Hebrew meaning of the name is historically (not theologically) aleatory. Not surprisingly, half of the Pharaoh names of the 18th dynasty have the suffix ‘Mose’.

Queen Satiah bore Tuthmose III’s firstborn son, Prince Amenemhat, who died prematurely, according to Egyptologists Aidan Dodson and Dyan Hilton. He held the curious and unusual title ‘overseer of the cattle’, probably because he was too young for higher honors. According to the Bible (which gives no names at all), Pharaoh’s firstborn died during the tenth plague, which Cameron and Jacobovici masterfully interpret as due to huge carbon dioxide leaks following seismic events. Amenhotep II, son (borne by Merytre-Hatshepsut, a Harem wife) and successor of Tuthmose III, appropriated Hatshepsut’s accomplishments. Amenhotep II was succeeded by his son, Tuthmose IV (reigned 1401-1391 BC). He suppressed a minor uprising in Nubia (as attested in the Konosso stela) around 1393 BC.