Why Do Covid Policies Only Affect Rich Countries? 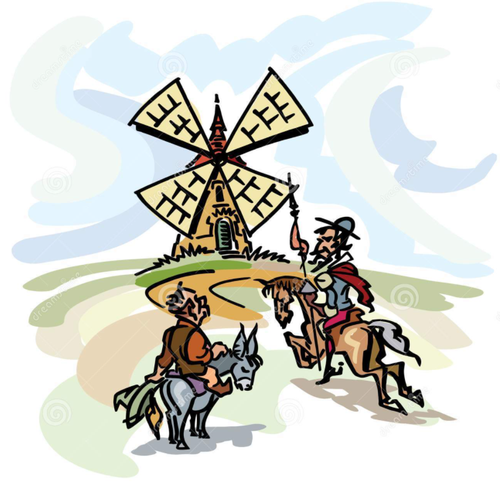 Don Quixote makes up for a heroic attack on a huge enemy; he disdains his awe-stricken squire, Sancho Panza, for hesitating to follow.

In the previous blog it was shown that the stringency of corona measures did not at all correlate with all-cause excess mortality. Consequently, it makes no sense to speak of a “corona pandemic”. There was a corona flu, no doubt, but mouth diapers are just as effective in fighting a flu as is painting your belly purple. In this blog, we show, using the same publicly accessible data, that the corona pandemic preferentially hit rich economies. In the graphs below, the horizontal axis again displays the Covid-19 Stringency Index of societal measures, on a scale from 0 (no measures) to 100 (extreme lock-down), imposed at the end of the year 2020. The vertical axis displays the accrual of the per capita national deficit in 2020 with respect to that in 2019, in US dollars. This quantity is a measure for a nation’s suffering (due to whatever cause, but in this case, obviously the stringency of corona measures), as it represents an increase in the collective burden: it is a transfer of wealth from all citizens equally to an ultra-small group of shareholders. Again, the blueish color depth is taken from the Gross Domestic Product per capita, whence it indicates the country’s wealth: the larger the GDPpc, the lighter blue the country’s color. From all countries, we selected those with a population larger than 6 million. These countries we divided into two wealth groups, with a GDPpc threshold of $15,000 per capita.

How are we to interpret these data? The idea is very simple. Anno 2021, the main economic players on the global level have lost all national connotation. Countries are reduced to milking cows of global mafias. The wealthiest of all these mafias is the Rothschild mafia, which owns the “American” Federal Reserve System. Now where would you steal, were you a professional thief? Would you go for rich pockets, or for poor ones? In this sense, the above graphs are the signature of your thief. How does this thief manage to steal from you, when you are not even aware of his existence? Well, that is a thief’s job: to go unnoticed. The thief will use any ruse to make you believe he does not exist. This he accomplishes by ridiculing conspiracy theorists. He does so justly, because conspiracy theorists are often ridiculous. But do not forget: the Rothschild mafia is rich enough to pullulate the conspiracy market with conspiracy nuts. If you believe that conspiracies are ridiculous by definition, then you are an idiot indeed. In the latter case, I guess you also believe that CO2 is bad for biological life on earth, and that heavy industry causes glaciers to melt. Actually, that is the very way in which the Rothschild companies outdo their competition: Make them believe that they have to fight imaginary mills, like Don Quixote in the stories of early 17th century’s Miguel de Cervantes Saavedra.