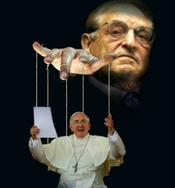 
Pope Francis brings 12 Syrian refugees with him on plane back to Italy, thus teaching Europe a little lesson in mercy. In my dictionary, this has little in common with Christian mercy. It seems very much like mercy from the gospel according to Soros.