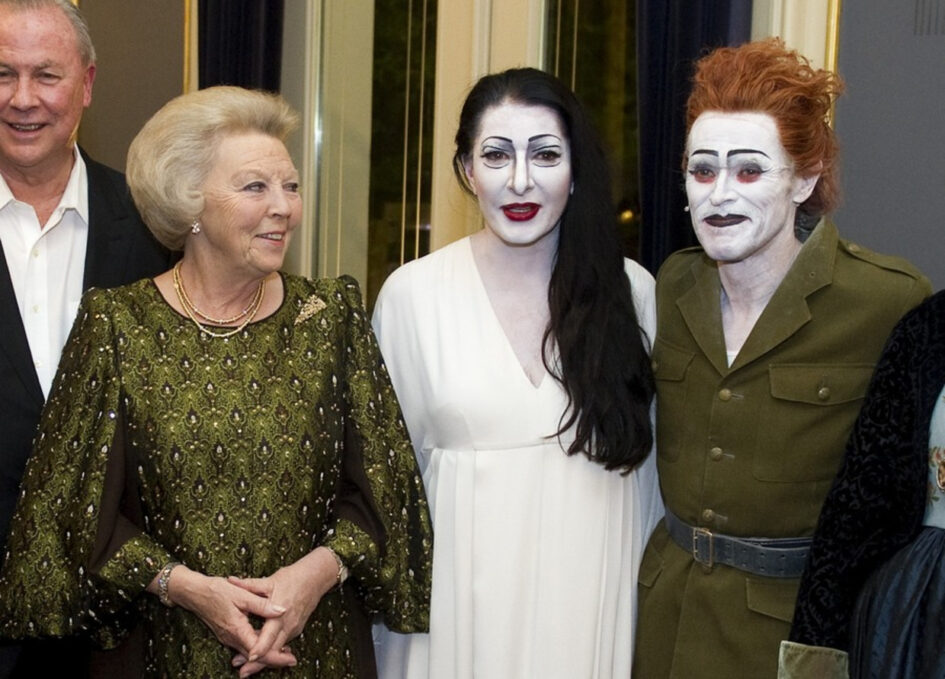 Her Majesty Queen-Mother Beatrix Wilhelmina Armgard, Princess of the Netherlands, Princess of Oranje-Nassau, Princess of Lippe-Biesterfeld, poses with Serbian artist Marina Abramović, June 22nd 2020 in the Royal Theatre Carré in Amsterdam, at the premiere of the show The Life and Death (Holland Festival). Princess Beatrix is known for her 1999 complaint ‘de leugen regeert’ (literally, ‘the lie reigns’) at a national meeting of Dutch editors-in-chief; for her membership of the club of rome, (founded 1968 by members of the original Morgenthau group during a meeting at Rockefeller’s private house in Bellagio, Italy) which aims at reducing the world population by large-scale campaigns of guileful sterilization in third world countries; and for her preposterously hypocritical Christmas speeches. Dutch newspapers commented that her 2005 personal decision not to assist at the funeral of Pope John Paul II, nor to be represented by any member of the Dutch Royal House, was religiously motivated. Obviously, that is nonsense: by assisting, she would have made a fool of herself in the eyes of her satanic club of rome friends.

In a moral context, the Dutch adjective for ‘wrong’ (‘fout’) sometimes has the connotation of treachery in World War II. That does not apply to Beatrix (born 1938 — although she profited enormously from it), but to her father, born Bernhard Friedrich Eberhard Leopold Julius Kurt Carl Gottfried Peter Graf von Biesterfeld. As admitted in a 2004, posthumously published, subsequently censored interview with Volkskrant, and as known by the Dutch war government, Bernhard was member of the SS. When Princess Juliana married him in 1937, Dutch Queen Wilhelmina (mother of Juliana) and she both knew of his Nazi past. In his book ‘The Thyssen Art Macabre’, David Litchfield explains that, after World War II, a secret mission called ‘Operation Juliana’ secured all Nazi-German investments of the Dutch Royal House and of the Thyssen family, to be shipped back safely to the Netherlands. As far as Nazi sympathies are concerned, the Dutch Royal House apparently does not underperform the English Royal House.