Ark of the Covenant Finally Discovered 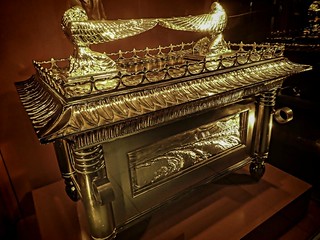 Steven Spielberg’s reconstruction of the Ark of the Covenant. The ridge surrounding the top is too high, and the Angels’ overarching wings are too centered: for the primary purpose of the Ark was to be a seat (whence the name of the cover of the Ark: Seat of Mercy), with the wings serving as a backrest. The real Ark is presently guarded in Jerusalem, but no official photographs are available. In 1982, anestetist/archaeologist Ron Wyatt scraped rusty-looking stains off the cracked stone lid covering the Ark, had them suspended, cultured and karyotyped. Ron wanted to know whether the blood was human or animal. The white blood cells were alive, and contained 24 chromosomes. The Jewish employees of the Jerusalem medical laboratory would not answer him: they insisted in asking whose blood this was. Ron testifies of this, and does so quite candidly: in a public talk, he mentions 23 X-chromosomes. A man with such a deficient biological education would be utterly unable to sell whatever biological lie.

The following text is a summary of a 2009 post on Anchorstone, with photo’s taken from Wyatt’s Discovery site.

In 1978, Ron Wyatt and his sons, Danny and Ronny, made two trips to Israel in order to drive to the western shore of the Gulf of Aqaba to go scuba diving in search of chariot parts in the Red Sea. Due to a painful swelling in Ron’s legs, he was forced to pause a few days. When sightseeing near the Damascus Gate, Ron had a supernatural experience. He returned in January, 1979 with the permission of the local authorities to excavate. They reached bedrock 38 feet below the present ground surface. Carefully removing debris, they found themselves in an approximately 15 foot diameter round chamber carved out of the rock with steps chiseled into the shaft descending from the top in a spiral to the bottom. At some point in time it had been modified and plastered, reused as a cistern. Either of these explanations would explain the presence of the “rope hole” chiseled in the cliff-face — it was for the rope that held the bucket or jug which was lowered down into the shaft to retrieve grain or water. Ron chiseled through the plaster and found a large amount of pottery among the dirt and debris used as fill to form the cistern. When he turned these pottery pieces in to Antiquities, the Israeli authorities informed Ron that the earliest dated back to the Jebusite time (10th century BC). The latest dated specimens were from the Roman period, whence the grain bin was closed in the first century AD.

In the cistern, Ron discovered a rectangular, near-square lid covering a rectangular hole of 23.5 inches deep. About four feet lower, he uncovered three more squarish holes chiseled in the rock in front of a platform. The cut-out niches (about twelve to thirteen inches square) probably displayed the crimes of the crucified. A Christian church had been built over the place of the crucifixion.

The oldest Roman coins had the image of Emperor Tiberius (Emperor from 14 to 37 AD). The latest coins were from 135 AD. This placed the date of the church between the time of the crucifixion and 135 AD. It was most likely built after 70 AD, when crucifixion was abandoned altogether. Christians were apparently tolerated by the Romans, as is supported by the fact that in 130 AD, when the Emperor Hadrian came to Jerusalem to rebuild it as a Roman city named Aelia Capitolina, he allowed Christians while forbidding Jews. This contributed to a revolt among the Jews in Judea in 132 AD. It resulted in the dramatic death of at least half a million Jewish men. Aelia Capitolina did not prosper. It did not suffer destruction, but merely fell into disuse.

Inside the church, Ron stumbled onto a thirteen feet diameter circular stone, which he identified as the seal-stone from the tomb of Joseph of Arimathaea in which Christ was buried (Mt 27:60). By this time, Ron and the boys had been working here for almost two years. They had begun in January of 1979 and it was now late 1980. The three decided to break through the cliff face, and broke through the rock into an open space. Enlarging the hole, they saw behind it a barren cavern (about 15 feet in height and of about the same width), which turned out to be only a very small part of a very extensive honeycomb of natural caves and tunnels within the mountain. By the end of 1981, Ron’s two sons abandoned their father’s quest.

Behind a 16 inch stalactite, Ron found a tiny hole. He knocked the stalactite off (and brought it to the US, where Ark Discovery keeps it to this day). Behind the hole was a chamber completely full of large rocks, with about 18 inches of clearance to the ceiling. Alone in this vast cave system, he took his hammer and chisel and enlarged the hole, crawling through. With only about 18 inches clearance, he had to lie on his stomach with nothing but his flashlight in his hand for light. It was 2 pm, Wednesday, January 6, 1982. He first stumbled upon a gold veneered table with a raised molding around the side, consisting of an alternating pattern of a bell and a pomegranate. He identified it as the Table of Shewbread. Toward the end of the cave, he discovered a stone case containing another golden table. The hole was covered with a heavy lid. Luckily the lid was broken, and he could peek through it, but was unable to touch the table. Subsequently, Ron found out that above the broken lid was a crack very much like the one some twenty feet higher, below the rectangular chiseled hole. He was astonished to learn that it was the same crack, and that the golden object was stored right below the place where Christ’s cross had stood. In the rock-filled chamber (22 feet long by 12 feet on 2 sides, while the other 2 sides followed the line of the cliff-face, narrowed down in one corner), he identified, besides the Ark of the Covenant (in the stone case) and the Table of Shewbread, a Golden Altar of Incense, a Golden Censer; a seven-branched Candlestick holder, a very large sword, an Ephod, a Miter with an ivory pomegranate on the tip, a brass shekel weight, numerous oil lamps, and a brass curtain ring. Inside the Ark, under the Mercy Seat, he found two Tables of Stone. On the back of the Ark was a small open cubicle with the the books Exodus, Numbers, Leviticus, and Deuteronomy. Amazingly, Ron found these scrolls, written on animal skins, in perfect condition.

This Cherub (winged lion with human head) was discovered by French archeologist Clermont-Ganneau in 1874. It was carved into a wall of Zedekiah’s grave, the entrance of which was used by the Israelites to hide the Ark of the Covenant. Wyatt reached the Ark of the covenant via another route, breaking his way through walls. It was definitely not the first time the Israelites had to hide the Ark. Jeremiah had done so, six centuries earlier: “Prompted by a divine message, the prophet gave orders that the Tent of Meeting and the ark should go with him. Then he went away to the mountain from the top of which Moses saw God’s Promised Land. When he reached the mountain, Jeremiah found a cave-dwelling; he carried the tent, the ark, and the incense-altar into it, then blocked up the entrance. Some of his companions came to mark out the way, but were unable to find it. When Jeremiah learned of this he reprimanded them. ‘The place shall remain unknown’, he said, ‘until God finally gathers his people together and shows mercy to them. Then the Lord will bring these things to light again, and the glory of the Lord will appear with the cloud, as it was seen both in the time of Moses and when Solomon prayed that the shrine might be worthily consecrated’” (2 Mac 2:4-8).

Ashurbanipal II of Assyria dominated the Levant from 668 BC. His capital city was Niniveh, at the Tigris river. Nahum had prophesied her horrible fall at the height of her glory. Babylonian King Nebuchadnezzar II had managed to ally with the Chaldeans, and revolted against Ashurbanipal II. He conquered Nineveh in 612 BC, and dealt with her horribly (Nah 3:7). At this time, King Josiah ruled Judah. He ordered the Levite Priests to return the Ark to the Temple of Solomon, from the place where Jeremiah had hidden it (Mount Nebo, see Deut 31:1-4). In 609 BC, the armies of Egyptian King Necho II marched northwards, in order to unite with their Assyrian allies in Carchemish. Despite the warnings of Prophet Jeremiah, King Josiah denied the Egyptians transit. Necho crushed Josiah in the plains of Meggido. Necho placed Jehoiakim on the throne, King Josiah’s eldest son. While in prison, Jeremiah dictated God’s word to Baruch. Upon hearing the prophecies, King Jehoiakim ordered several prophets to be executed (among whom Uriah), but the Judean princes hid Jeremiah and Baruch. In 605 BC, Nebuchadnezzar defeated King Necho at the Battle of Carchemish, and subsequently besieged Jerusalem. To avoid the destruction of Jerusalem, Jehoiakim surrendered, and paid tribute from the treasury in Jerusalem. In 601 BC, Nebuchadnezzar unsuccessfully attempted to invade Egypt and was repulsed with heavy losses. The failure led to numerous rebellions among the states of the Levant which owed allegiance to Babylon, including Judah. King Jehoiakim conveniently changed his alliance back to Egypt, and stopped paying tribute to Nebuchadnezzar. Consequently, Nebuchadnezzar laid siege to Jerusalem for the second time. Jehoiakim died during the siege, in 598 BC. The Levite priests hid the Ark of the Covenant in the intricate cave system below the city. Jerusalem fell in 597 BC. Nebuchadnezzar pillaged the Royal Palace and the Temple, and deported ten thousand Judeans, including the young king Jeconiah and his court. Nebuchadnezzar installed Jeconiah’s uncle, Zedekiah, as puppet-king of Judah. Eleven years later, Zedekiah rebelled, too, and allied with Pharaoh Hophra, King of Egypt. In 589 BC, the Babylonian army sieged the city for the third time. Jerusalem fell in 587 BC, and Nebuchadnezzar razed her to the ground. Very probably, the only priests who knew where the Ark had been hidden in 598 BC, died in 587 BC. In the 2nd century BC, the pious Maccabees (descendants from the Jews who had not been deported) had no idea of the existence of the Ark.