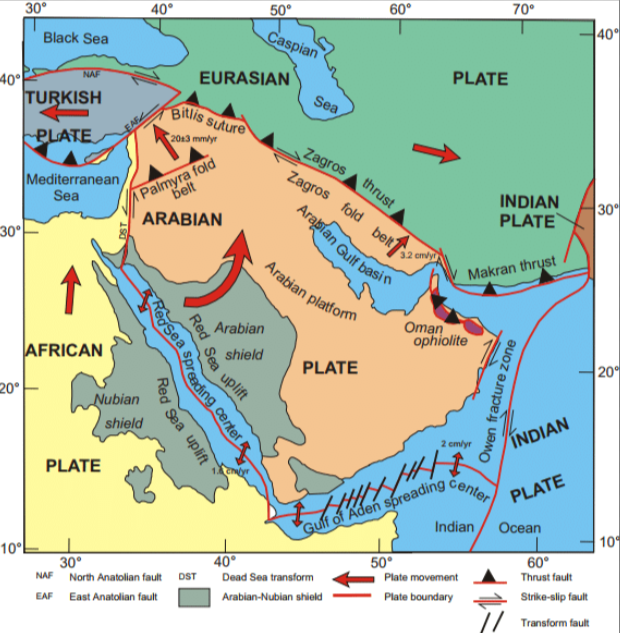 The Hebrew consonants sph can refer to suph (reed), suphah (hurricane), or soph (destruction). Hence, the biblical term Ym Sph can mean either Sea of Reeds, Hurricane Sea, or Sea of Destruction. Archeologists traditionally identify this sea with the Gulf of Suez. Recently, it was demonstrated convincingly that the sea in question is not the Gulf of Suez, but the more eastward Golf of Aqabah.
At the Nuweiba crossing of the Gulf of Aqabah, the maximum depth is 800 meter. As the Gulf of Aqabah has an efficient surface (surface over which the depth of the Gulf exceeds 400 meter) of 1500 square kilometers, the volume of water to be displaced to enable free crossing at Nuweiba, amounts to 1200 kilometers cube. Likewise, lowering the sea level by 800 meter throughout the Gulf of Suez, requires a total water displacement of 3200 kilometers cube. The sum of these two (4400 kilometers cube), can flow nowhere else but in the Red Sea. On the above map, it is clearly visible that the Arabian and African plates are slowly moving apart. These movements are usually unhindered. Sometimes, huge amounts of friction among the plates frustrates that gradual motion. Like in the case of the 2011 Tōhoku earthquake, which devastated the coastline of eastern Japan (proving the incredible solidity and harmlessness of nuclear reactors, even when as old-fashioned as the Fukushima Daiichi nuclear reactors), the gradual motion can be frustrated during such a long time, that it provokes an earthquake, in which the two plates move over relatively large distances (tens of meters) in a relatively short period of time (several minutes). In Tōhoku, the Japanese and Pacific plates slid along each other by a total distance of 50 meters, over a total fault length of 250 kilometers. This happened at 32 kilometers below sea level. Had it occurred on land (which is possible, too), then one would have seen one’s neighbor’s house travel 50 meter away in six minutes. Not something spectacular in terms of velocity, as a relaxed walking speed is about six times faster.

The obvious question is: how much should the Arabian and African plates have drifted apart, in order to sink the above estimated 4400 cubic kilometers of water? The earth’s crust thickness at the Red Sea is of continental nature, whence some 60 kilometers thick. The Red Sea is about 2250 kilometers long. It follows immediately that the two plates must have drifted 33 meters apart, in order to create the required sink (60*2250*0.033 = 4455). These 33 meters are by no means excessive, given the lateral displacement of 50 meters at Tōhoku. Should one think of Tōhoku as of an exceptional phenomenon? Not really. Since modern record-keeping began early in the 20th century, it was the fourth most powerful earthquake in the world. Hence, Tōhoku-size earthquakes globally occur four times every century. This rate was no different 35 centuries ago, in the times of Moses, as the usual geological time unit is one million years.

The surface energy of the seismic waves from the Tōhoku earthquake was estimated at 2×10^17 Joule. Given the earth’s gravitational pull of 10 m/s^2, this energy corresponds to a mass-depth product of 20×10^15 kg m. The above-mentioned (Mosaic) water volume of 4400 cubic kilometers represents a water mass of approximately 4.4 10^15 kg. For the the Tōhoku mass-depth product, the Mosaic mass implies a depth of 4.5 meters (20/4.4=4.5). In other words: the surface energy needed for the Tōhoku tsunami is exactly the same as the energy needed to lift the Mosaic water mass by 4.5 meters. A major difference between the Tōhoku tsunami and the Red Sea tsunami is that in Tōhoku, the main effect is a 50 meter horizontal sliding of the contiguous plates, and the minor effect a 7 meter vertical offset effect. Only the latter can contribute to the wave energy of a tsunami. In the Red Sea, the tectonic plates drift apart rather than slide alongside, whence in the Red Sea significantly less earthquake energy was used for horizontal sliding. The only reason that the tsunami merely swept the Egyptian army, and not the Israelites (who were but slightly above sea level), was that the Jezîret Tīrān island in the straight of Tiran, with mountain ridges of 500 meters above sea level, severely hindered the propagation of the Red Sea tsunami into the the Gulf of Aqabah.

It is interesting to note the planetary consequences of the 2011 Tōhoku earthquake, even though minor: Earth’s axis shifted by tens of centimeters, and the speed of Earth’s rotation increased, shortening the day by 1.8 microseconds. Obviously, an earthquake is not at the origin of the two-step retrocession of the shadow on Ahaz’ sundial, as a divine sign of King Hezekiah’s healing (Is 38:8, and 2 Kings 20:8-11), nor are alterations in solar or planetary orbiting patterns. Rather, it should be explained in terms of atmospheric turbulences: like the 1917 solar miracle in Portugal, as already proposed by Stanley Jaki in his 1999 God and the Sun at Fátima.

Earthquakes come in three classes, depending on the nature of the underlying plate tectonics.